Cs-correctors become more and more available for CTEM and STEM. Presently, all CTEM correctors employ a symmetric hexapole doublet to compensate for the spherical aberration of the objective lens. The same principle and a similar design is used for the CEOS hexapole STEM corrector.

The optical performance of a Cs-corrector is determined by the information limit of the microscope and its characteristic residual and residual parasitic geometrical aberrations. 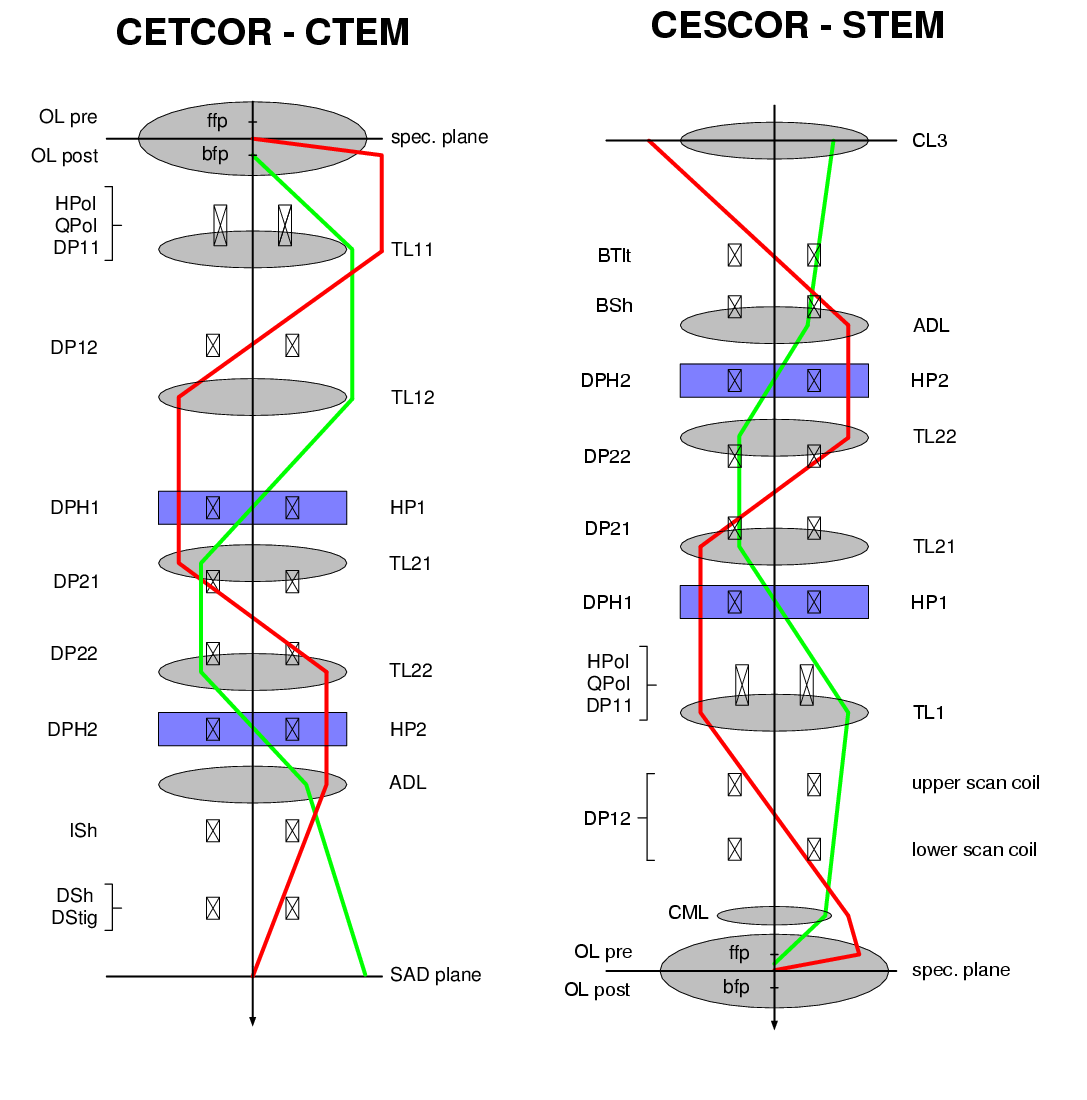 The contrast transfer for high spatial frequencies is damped by the cumulative effect of all incoherent perturbations (e.g. chromatic focus spread, electric and mechanic instabilities, ...). The information limit depends on all components of the instrument. It sets a fundamental limit for the performance of the microscope.

Geometrical axial and off-axial higher-order aberrations of the ideally manufactured and aligned system w.r.t. to a certain course of the Gaussian fundamental rays. The cumulative effect of the residual aberrations sets a limit for the achievable optical quality of the instrument.

For example, to compensate for parasitic axial coma B2 = B2x + i B2y in CESCOR the optic axis is tilted w.r.t. the center of the hexapole doublet by means of the deflector elements BTlt above and DP12 below the corrector. Due to the corrector's negative third-order spherical aberration C3(HP) = -C3(OL) axial coma with arbitrary orientation is induced depending on the azimuthal direction of the tilt angle.

To employ the CESCOR B2 Auto Alignment Tool first two probe tableaux in over-focus and under-focus are acquired. From these data the present residual and residual parasitic axial aberrations of the system are calculated. Then the Auto Alignment Tool is activated at the CESCOR user GUI to compensate for the measured axial coma B2. A subsequent (optional) tableau acquisition demonstrates that B2 has been corrected successfully. 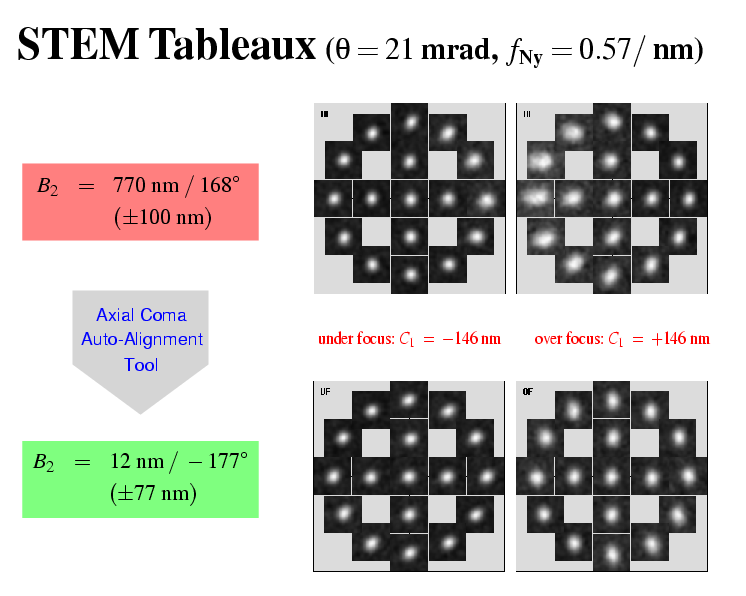 For the CETCOR we demonstrate that the transfer system can be employed to tune the fifth-order spherical aberration while C3 remains corrected. The optimum transfer function at the center of the image is obtained for C5-free alignment with C3=C5=0. In this case, the limiting residual aberration is a small six-fold astigmatism of A5=1.0mm. Alternatively, the isotropical off-axial coma can be nulled. In this case a small residual C5=2.1mm must be accepted. 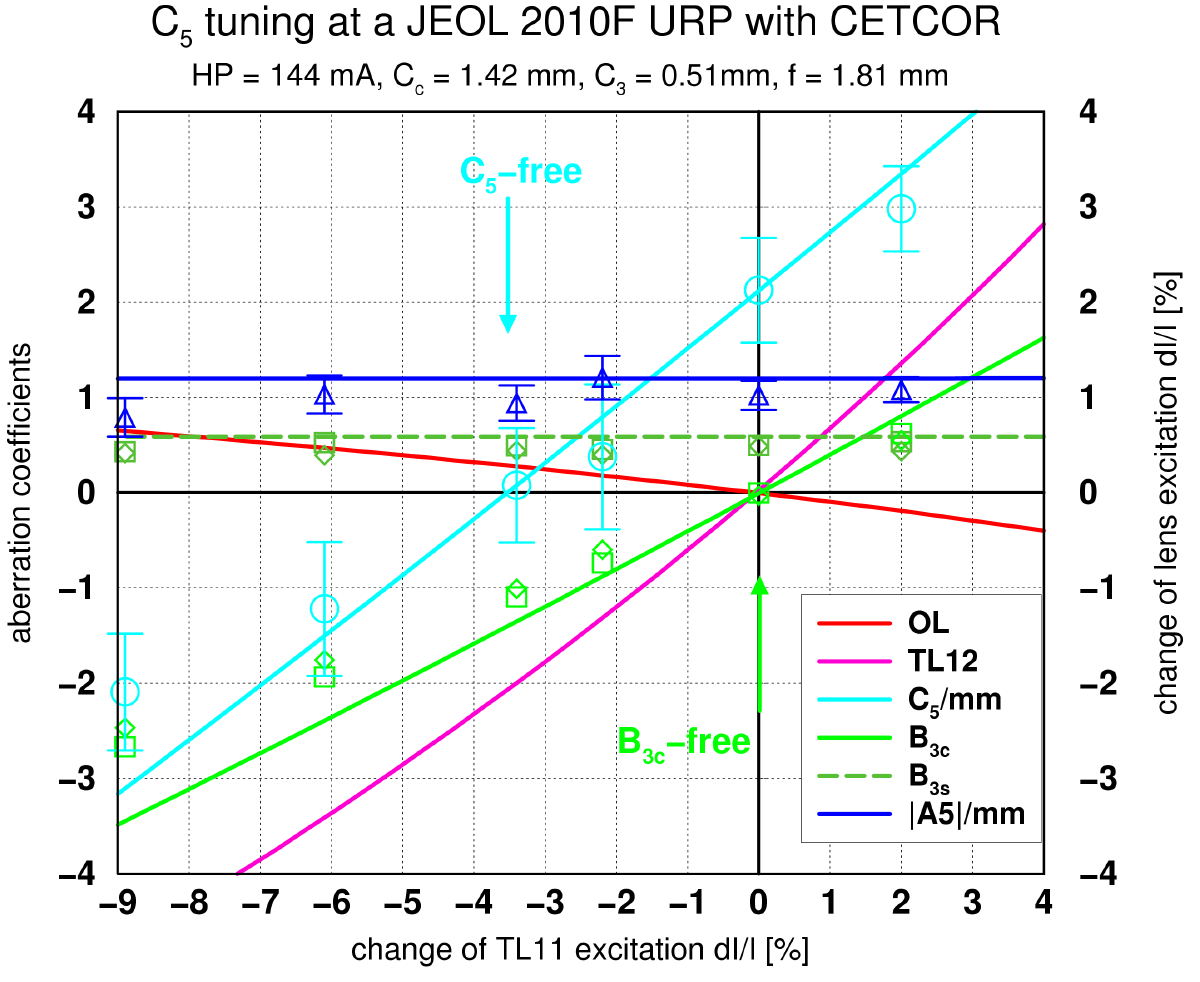 For the CETCOR the semi-aplanatic condition B3c=0 is violated for C5-free alignment. This reduces the number of equally-well resolved image points. For the CESCOR residual off-axial coma B3 = B3c + i B3s is not critical, since the scan is performed between the corrector and the objective lens. 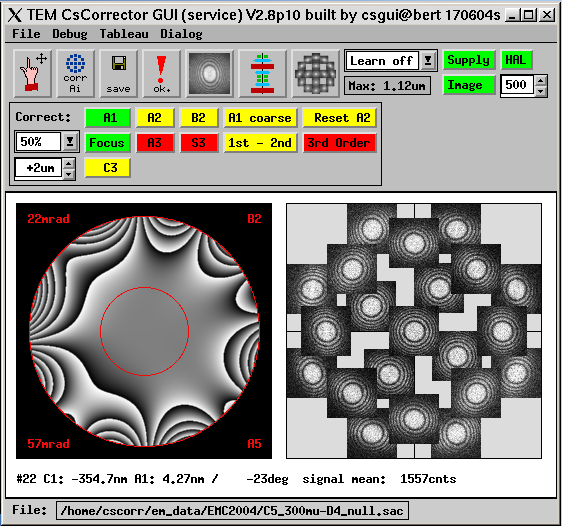 The experiment shows very good agreement with our theoretical predictions. We have obtained a very detailed quantitative understanding of the corrector's optical properties. This theoretical advancement will drive the development of improved and/or novel TEM/STEM corrector systems in the near future.

Our experimental results demonstrate that our present corrector systems are already able to corrected for the third- and fifth-order spherical aberration, simultaneously. For JEM2010F/CESCOR with URP pole piece the residual six-fold astigmatism is very small. Hence, for the probe corrector CESCOR C5-free alignment is considered the preferred mode of operation to enable minimum probe size for STEM imaging with sub-Ångström resolution.